QUOTES OF GEORGE ORWELL (1903-1950): First Thoughts in the Aftermath of Trump’s Election 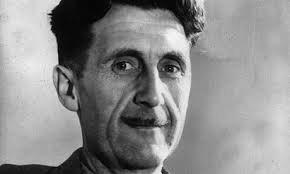 All political thinking for years past has been vitiated in the same way. People can foresee the future only when it coincides with their own wishes, and the most grossly obvious facts can be ignored when they are unwelcome. George Orwell

The very concept of objective truth is fading out of the world. Lies will pass into history. George Orwell

Doublethink means the power of holding two contradictory beliefs in one’s mind simultaneously, and accepting both of them.

It is almost universally felt that when we call a country democratic we are praising it; consequently, the defenders of every kind of regime claim that it is a democracy, and fear that they might have to stop using the word if it were tied down to any one meaning.

Every war when it comes, or before it comes, is represented not as a war but as an act of self-defense against a homicidal maniac. George Orwell

Serious sport has nothing to do with fair play. It is bound up with hatred, jealousy, boastfulness, disregard of all rules and sadistic pleasure in witnessing violence. In other words, it is war minus the shooting. George Orwell

Political language… is designed to make lies sound truthful and murder respectable, and to give an appearance of solidity to pure wind. George Orwell

So much of left-wing thought is a kind of playing with fire by people who don’t even know that fire is hot. George Orwell

The essence of being human is that one does not seek perfection. George Orwell

The nationalist not only does not disapprove of atrocities committed by his own side, but he has a remarkable capacity for not even hearing about them. George Orwell

In our age there is no such thing as ‘keeping out of politics.’ All issues are political issues, and politics itself is a mass of lies, evasions, folly, hatred and schizophrenia. George Orwell

The Catholic and the Communist are alike in assuming that an opponent cannot be both honest and intelligent. George Orwell

We have now sunk to a depth at which restatement of the obvious is the first duty of intelligent men. George Orwell

If you want a vision of the future, imagine a boot stamping on a human face – forever. George Orwell

The best books… are those that tell you what you know already. George Orwell

War against a foreign country only happens when the moneyed classes think they are going to profit from it. George Orwell

Not to expose your true feelings to an adult seems to be instinctive from the age of seven or eight onwards. George Orwell

We of the sinking middle class may sink without further struggles into the working class where we belong, and probably when we get there it will not be so dreadful as we feared, for, after all, we have nothing to lose. George Orwell

The essential act of war is destruction, not necessarily of human lives, but of the products of human labor. George Orwell

Men can only be happy when they do not assume that the object of life is happiness. George Orwell

Man is the only creature that consumes without producing. He does not give milk, he does not lay eggs, he is too weak to pull the plough, he cannot run fast enough to catch rabbits. Yet he is lord of all the animals. George Orwell

He was an embittered atheist, the sort of atheist who does not so much disbelieve in God as personally dislike Him. George Orwell

There is hardly such a thing as a war in which it makes no difference who wins. Nearly always one side stands more or less for progress, the other side more or less for reaction. George Orwell

Saints should always be judged guilty until they are proved innocent. George Orwell

We have now sunk to a depth at which restatement of the obvious is the first duty of intelligent men. George Orwell

I sometimes think that the price of liberty is not so much eternal vigilance as eternal dirt. George Orwell

It is also true that one can write nothing readable unless one constantly struggles to efface one’s own personality. Good prose is like a windowpane. George Orwell

To survive it is often necessary to fight and to fight you have to dirty yourself. George Orwell

At fifty everyone has the face he deserves. George Orwell

War is evil, but it is often the lesser evil. George Orwell

No advance in wealth, no softening of manners, no reform or revolution has ever brought human equality a millimeter nearer. George Orwell

Mankind is not likely to salvage civilization unless he can evolve a system of good and evil which is independent of heaven and hell. George Orwell

The intellectual is different from the ordinary man, but only in certain sections of his personality, and even then not all the time. George Orwell

A dirty joke is a sort of mental rebellion. George Orwell

One can love a child, perhaps, more deeply than one can love another adult, but it is rash to assume that the child feels any love in return. George Orwell

Freedom is the freedom to say that two plus two make four. If that is granted, all else follows. George Orwell

As I write, highly civilized human beings are flying overhead, trying to kill me. George Orwell

Orwell wrote literary criticism, poetry, fiction, and polemical journalism. He is perhaps best known for his dystopian novel Nineteen-Eighty Four (published in 1949) and the allegorical novella Animal Farm (1945). His non-fiction works are widely acclaimed, as are his essays on politics, literature, language, and culture.

In 2008, The Times ranked him second on a list of “The 50 greatest British writers since 1945”.[4] Orwell’s work continues to influence popular and political culture, and the term Orwellian—descriptive of totalitarian or authoritarian social practices—has entered the language together with many of his neologisms, including cold war, Big Brother, thought police, Room 101, memory hole, newspeak, doublethink, and thoughtcrime.