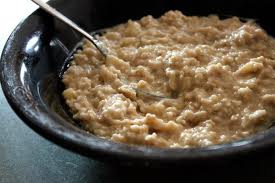 Many years ago a wise friend gave me a name for human love.  She called it “stirring-the-oatmeal” love.  She was right: Within this phrase, if we will humble ourselves enough to look, is the very essence of what human love is, and it shows us the principal differences between human love and romance.

Stirring the oatmeal is a humble act—not exciting or thrilling.  But it symbolizes a relatedness that brings love down to earth. It represents a willingness to share ordinary human life, to find meaning in the simple, unromantic tasks;  earning a living, living within a budget, putting out the garbage, feeding the baby in the middle of the night.  To “stir the oatmeal”; means to find the relatedness, the value, even the beauty in simple and ordinary things, not to eternally demand a cosmic drama, an entertainment, or an extraordinary intensity in everything. Like the rice hulling of the Zen monks, the spinning wheel of Gandhi, the tent making of Saint Paul, it represents the discovery of the sacred in the midst of the humble and ordinary.

Jung once said that feeling is a matter of the small. And in human love, we can see that it is true. The real relatedness between two people is experienced in the small tasks they do together: the quiet conversation when the day’s upheavals are at rest, the soft word of understanding, the daily companionship, the encouragent offered in a diffuclt moment, the small figt when least expected, the spontaneous gesture of love. 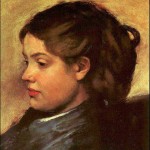 When a couple are genuinely related to each other, they are willing to enter the whole spectrum of human life together.  They transform even the unexciting, difficult, and mundane things into a joyful and fulfilling component of life. By contrast, romantic love can only last so long as a couple are “high” on one another, so long as the money lasts and the entertainments are exciting.  “Stirring the oatmeal” means that two people take their love off the airy level of exciting fantasy and convert it into earthy, practical immediacy.

A man’s human love desires that a woman become a complete and independent person and encourages her to be herself. Romantic love only affirms what he would like her to be, so that she could be identical to anima.  So long as romance rules a man, he affirms a woman only insofar as she is willing to change, so that she may reflect his projected ideal. Romance is never happy with the other person just as he or she is.

Human love necessarily includes friendship: friendship within relationship, within marriage, between husband and wife. When a man and a woman are truly friends, they know each other’s difficult points and weaknesses, but they are not inclined to stand in judgment on them. They are more concerned with helping each other and enjoying each other than they are with finding fault.

In romantic love there is no friendship.  Romance and friendship are utterly opposed energies, natural enemies with completely opposing motives.  Sometimes  people say: “I don’t want to be friends with my husband [or wife]; it would take all the romance out of our marriage.”  It is true: Friendship does take the artificial drama and intensity out of a relationship, but it also takes away the egocentricity and the impossibility and replaces the drama with something human and real.

If a man and woman are friends to each other, then they are “neighbors” as well as lovers; their relationship is suddenly subject to Christ’s dictum: “Love thy neighbor as thyself.”  One of the glaring contradictions in romantic love is that so many couples treat their friends with so much more kindness, consideration, generosity, and forgiveness than they ever give to one another! When people are with their friends, they are charming, helpful, and courteous. But when they come home, they often vent all their anger, resentments, moods, and frustrations on each other. Strangely, they treat their friends better than they do each other.

When two people are “in love,” people commonly say that they are :more than just friends.”  <pst [ep[;e think that being “in love” is a much more intimate, much more “meaningful” relationship than “mere” friendship. Why, then, do couples refuse each other the selfless love, the kindness and good will, that they readily give to their friends? People can’t ask of their friends that they carry all their projections, be scapegoats for all their moods, keep them feeling happy, and make life complete for them. Why do couples impose these demands on each other?  Because the cult of romance teaches us that we have the right to expect that all our projections will be borne—all our desires satisfied, and all our fantasies made to come true—in the person we are “in love” with. In one of the Hindu rites of marriage, the bride and groom make to each other a solemn statement “You will be my best friend.” Western couples need to learn to be friends, to live with each other in a spirit of friendship, to take the quality of friendship as a guide through the tangles we have made of love.

-TNP: The Official Site of >>
<< -Tarot and Psychology (Overview)