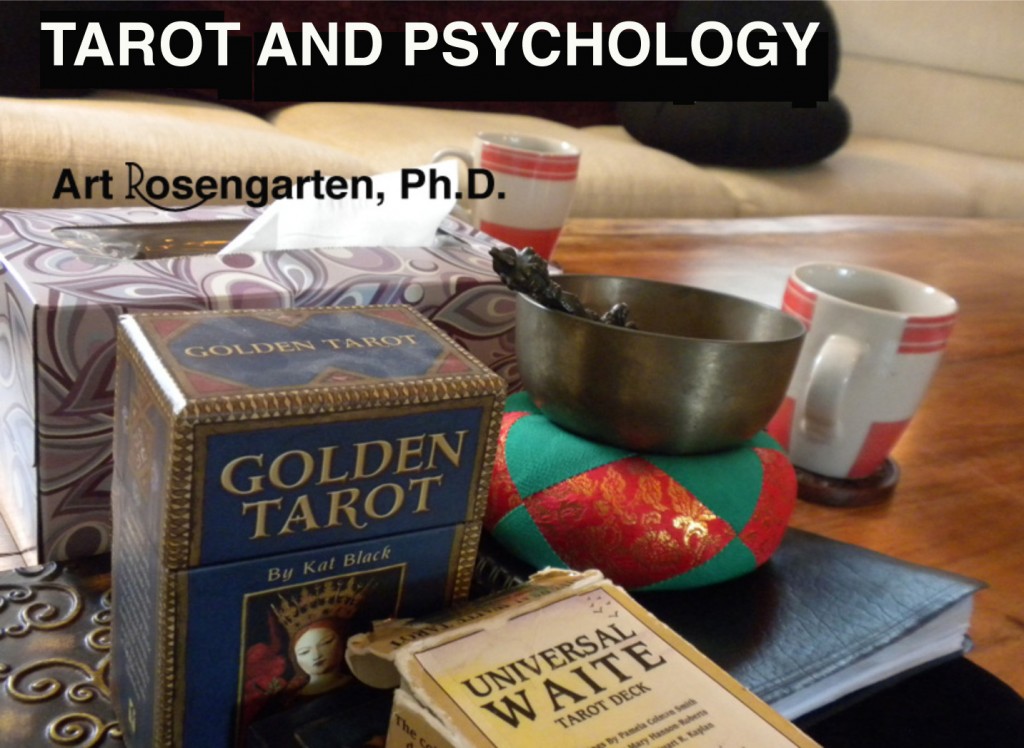 Dr. Art Rosengarten is widely regarded as a pioneer in the emerging field of “Tarot Psychology” or “Psychological Tarot” having written the first doctoral dissertation on the subject in 1985 entitled Accessing the Unconscious: A Comparative Study of Dreams, TAT, and Tarot, as well as his main published texts to date, Tarot and Psychology: Spectrums of Possibility (2000) and his original deck and expanded tarot system Tarot of the Nine Paths: Advanced Tarot For The Spiritual Traveler (TNP) published in 2009. 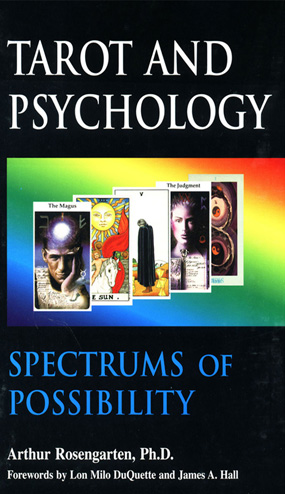 What experts have said about Tarot and Psychology: Spectrums of Possibility:

“A deliciously rich exploration of the Tarot. Never have I seen the Tarot’s deep wealth of meaning uncovered and explained with such skilled and loving intelligence.”

Myth, and the Trickster  and The Radiance of Being

“Arthur Rosengarten’s Tarot And Psychology: Spectrums of Possibility  joins Sally Nichols’ Jung and Tarot and Irene Gad’s Tarot and Individuation as the third major book on Tarot from a Jungian perspective.  Spectrums of Possibility combines moving case studies with practical details of exactly how Tarot can be used as a therapeutic tool. There are no apologies here for his acceptance of Tarot as a divinatory tool; instead Rosengarten tries to show even skeptics how divination is rooted in the synchronistic coming together of a questioner’s need with the layout of the Tarot.

More than any other book to date, it also provides a deep theoretical examination of how this synchronicity is inherent in the archetypal symbolism of the Tarot. An important and useful book.”

“What happens when psychic arts meet scientific methodologies, when prediction marries meaning, when image and empiricism come together? In this radical breakthrough and brilliant masterwork, Art Rosengarten merges Tarot’s 600 years of psycho-socio-cultural symbol-encoding with the newer discipline of psychology…I predict a major success, and a turning point for Tarot as well as for psychologists who pioneer the use of this demonstrably valuable resource.”

– Mary K. Greer, author of Tarot For Your Self, Tarot Mirrors, and Tarot Constellations

To receive  a Tarot Consultation with Dr. Rosengarten:

-Readings. Single 90 minute readings cost $155 (by phone or office), payment by cash or credit card. For the Psychological Tarot Series (1) sign up for five 90 minute readings over the course of three months. As with dream interpretation, a series of readings track and elucidate ongoing life themes and struggles during periods of transition providing a rich window from which to open awareness to the natural intelligence stimulated by this process-oriented therapy. Particular cards and symbol patterns will repeat over weeks and months of exploration, and one experiences a special connection to deeper spheres of their psychological life.  Journal work may be recommended as well as other homework exercises in depth psychology that will be incorporated and discussed in your next session. Cost $625. Office or phone sessions can be arranged to accomodate your schedule. Call Dr. Rosengarten to discuss this therapeutic process further. (760) 944-6710 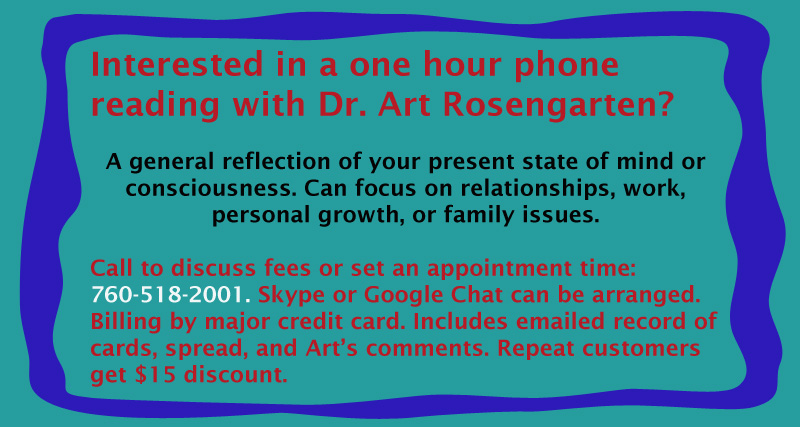 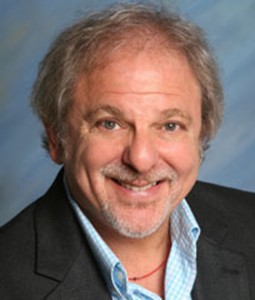 The human psyche is as fascinating as it is complex. Understanding it is a major goal of psychologists, as well as anyone engaged in self-inquiry. There are many approaches one can take, and many tools that can help. Tarot is one such tool that is gaining in popularity as a way to support and and facilitate personal understanding. As Dr. Arthur Rosengarten wrote in his classic book, Tarot and Psychology: Spectrums of Possibility:

“The Tarot is a remarkable collection of images and symbols that picture multidimensional themes of universal human experience. With a random series of cards properly interpreted in pre-designated positions (a spread), the intuitive observer will be surprised by the amazing subtlety and sophistication with which this method facilitates self-reflection, deep insight, and spiritual wisdom. Contrary to a habitual Western mental reflex, in practice the placing of supreme trust in the natural intelligence that collects momentarily around events awakens a unique, non-linear, mode of perception through what we respectfully call ‘sacred’ or ‘empowered’ randomness. Loosely speaking, this is what is meant by ‘divination’ and is how the Tarot method is set in motion.”

Art’s innovative methods of interpretation developed over decades of teaching and practice as a Jungian-based psychologist are designed to blend your own intuitions with some understanding of the established system of Tarot, its many applications, curiosities, and dimensions. (Below)  Samples from the Rohrig Tarot: 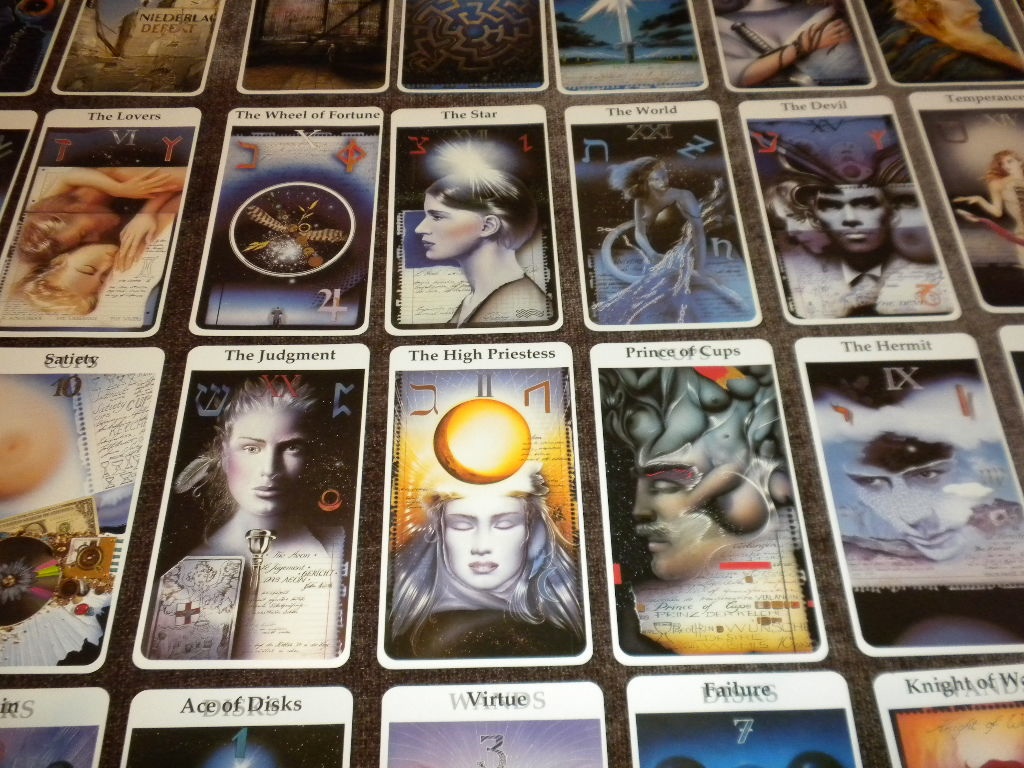 Art Rosengarten’s highly acclaimed book and deck can be purchased on this site or on Amazon.com

To order an autographed book & deck Combo Package: Tarot and Psychology: Spectrums of Possibility ($20) PLUS  –Tarot of the Nine Paths: Advanced Tarot for the Spiritual Traveler (box set $39.95) COMBO only $55.00 plus shipping and handling. Call (760) 944-6710 or email: artrosengarten@earthlink.net. Also available at Amazon and other booksellers. 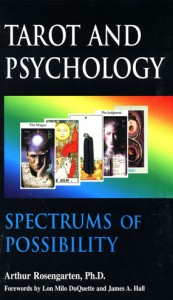 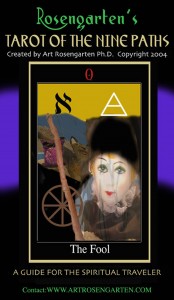 Click to hear an interview on Shrinkrap Radio with Dr. Art Rosengarten on the subject of Tarot and  Psychology

Tarot of the NIne Paths: Samples from Art’s deck TNP which was crafted entirely out of Jungian Sandplay miniatures in his office: 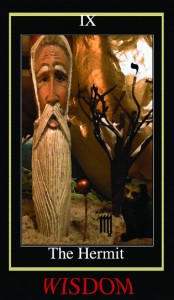 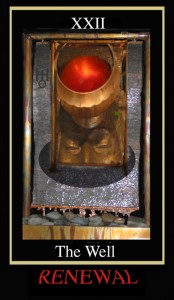 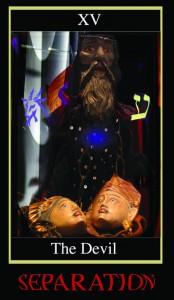 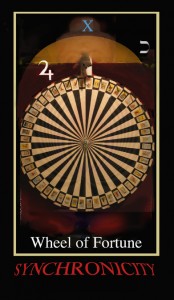 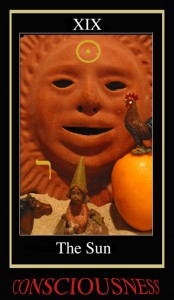 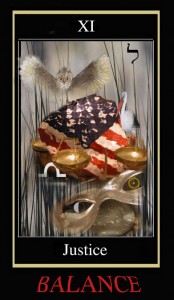